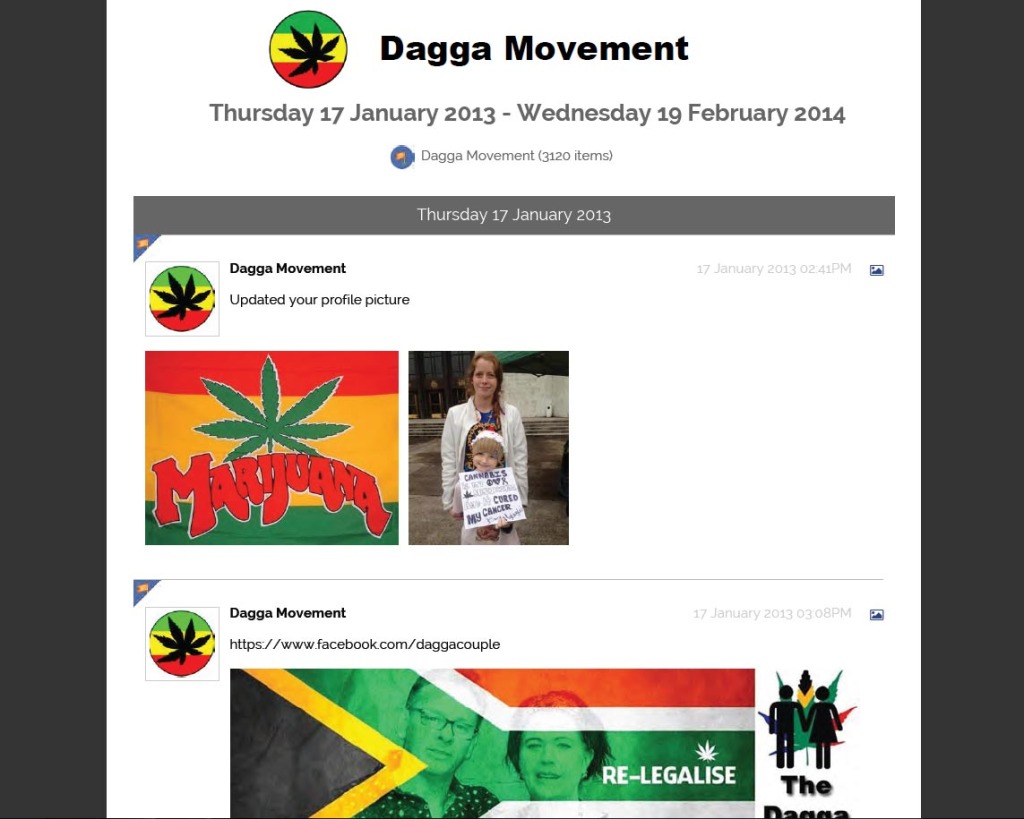 Have you heard? Dagga is safer than sugar!

The governments of the world do everything in their power to keep dagga illegal, the “effects” of dagga is that it breaks down cultural and racial barriers and brings people together in a social settings from where they then learn that the differences which they think they had is only cosmetic and nothing so serious that the groups can’t get along.

Governments don’t like people from different groups gelling well, because they thrive on the wedges they drive between us, this is what keeps them in power.

This is also why the government fluoridate our municipal water supply without consent.

Except for the topical application of fluoride once ingested serves no medical purpose however studies have shown more negative impacts from fluoride than from dagga.

Yet fluoridation is legal and dagga is not.

On an annual basis, 1 acre of dagga will produce as much fiber as 2 to 3 acres of cotton. Dagga fiber is stronger and softer than cotton, lasts twice as long as cotton, and will not mildew.

Hemp can be used to produce fiberboard that is stronger and lighter than wood. Substituting dagga fiberboard for timber would further reduce the need to cut down our forests.

Dagga can be used to produce strong, durable and environmentally-friendly plastic substitutes. Thousands of products made from petroleum-based plastics can be produced from dagga-based composites.

It takes years for trees to grow until they can be harvested for paper or wood, but dagga is ready for harvesting only 120 days after it is planted.

Dagga can grow on most land suitable for farming, while forests and tree farms require large tracts of land available in few locations.

Harvesting dagga rather than trees would also eliminate erosion due to logging, thereby reducing topsoil loss and water pollution caused by soil runoff.

By using hemp hurds (the cellulose from the centre of the hemp stalks) for the production of methanol after we have extracted the fibres, we get to make fuel from carbon that has been extracted from the atmosphere, not from under the ground.

When it is burnt, the carbon goes back into the atmosphere. The next crop would sequester that carbon again for reuse as energy or to be permanently sequestered in a hemp block (for example).

Cannabis hemp allows us to have a carbon neutral energy cycle, which is a VASTLY better technological option that using finite and polluting fossil carbon.

We don’t need electric vehicles if we have hemp hurd methanol. This cuts out the inefficiency of the batteries in an electrical system.

Ideally we could also geo-engineer our planet back to health by the mega-scale planting of cannabis, not only for carbon neutral energy, but ALSO to sequester all those fossil carbon emissions that are damaging our climate system. In other words, we have to fill our empty coal mines and oil wells up with carbon from hemp in order to fix the atmosphere (and leave resources for future generations.)

You don’t need to have cancer to use dagga as medicine. Word of the day PREVENTATIVE!

Every time you consume dagga whether it is by smoking, eating or drinking, you are self medicating and preventing cancer.

Why are we arrested for wanting to live a healthy lifestyle!

Dagga is a lifestyle not a drug.
Dagga is a way of life not a crime.

Police: You can’t have DAGGA unless you pay a bribe or sorry but it is my job and dagga is illegal.
Politicians: You can’t have DAGGA we have some corporate solution that are much worse but profits my bank account much better thank you!
Drunkards: *Unavailable for comment* beating his wife or passed out.
Daggaheads: Puff Puff Pass! To the Left!

To an ignorant prohibitionist everything I say is used to justify my behaviour.
• The expression ‘drug addiction’ should no longer be used and we should talk instead of substance abuse and dependency;• Between 5% and 10% of regular dagga users are at risk of developing a dependency;
• Physical dependency on dagga is virtually non-existent;
• Psychological dependency is moderate and is certainly lower than for nicotine or alcohol;• Most regular users of dagga are able to diverge from a trajectory of dependency without requiring treatment;
• There are many forms of treatment but nothing is known about the effectiveness of the different forms of treatment for dagga dependency specifically;
• As a rule, treatment is more effective and lesscostly than incarceration;
• Studies of the treatment programs should be conducted, including treatmentsprograms for people with cannabis dependency; and
• Studies should be conducted on the interaction of the cannabinoid and the opioid systems.

The prohibition puts dagga in the hands of children and corrupts the police force.

We have to march for our freedom. We aren’t criminals.

We shouldn’t be made to feel ashamed when they label us potheads and criminals. They the government and everyone who is prohibitionist are the guilty party.

Attention South African peeps! Do not forget to jot down the Global Dagga March in your calendar 4MAY2013 10AM CAPE TOWN Cnr Keizergracht / Chapel St!

In South Africa 3666.67 people die every month because of tobacco. Not a single life has ever been taken by dagga yet it is illegal. I want to choose a safe alternative to alcohol and tobacco but I am branded a criminal for doing so!

I am exposed to the black market where a person of any age could buy any illegal item.

I am driven to drink by our government who is strongly influenced by the tobacco, alcohol and oil industries.

Bring real crime down by freeing the SAPS of 1 000 000 hours they spend on booking and jailing dagga users. Bring down the road death toll. Bring down prohibition.

If we start now South Africa can solve world hunger in 4 months.

There is no madness except the madness of prohibition.