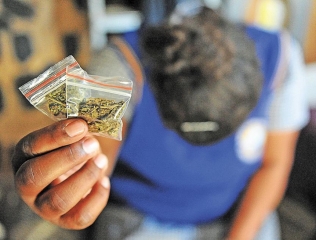 The arrests occurred after pupils were caught with dagga estimated to be worth R2 000 000.

The drama unfolded when a vigilant community patroller saw a pupil throw a school bag over the school’s perimeter fence. Another pupil retrieved the bag.

This occurred while other pupils were entering the school though the main gate. All the pupils had their bags with them.

The community patroller smelt a rat and alerted EMPD Crime Prevention Unit members.
It turned out that the patroller’s hunch was right. On searching the school bag, the EMPD officers discovered that the bag was filled with nearly one kilogramme of dagga.

The two 15-year-old pupils, who were identified as the owners of the dagga-laden bag, led the police officers to the dealer who used them to peddle dagga at the school.

The pupils pointed out a house in Phomolong Section and the police officers moved in. Three people, who were in the house, were arrested.

The two pupils were released into the custody of their parents as they are minors.
The three suspects who were arrested were charged with possession of, and dealing in, dagga at the Tembisa SAPS.

The suspects are expected to appear in the Tembisa Magistrate’s Court soon.