Although cannabis may have potential therapeutic value, inhalation of a combustion product is an undesirable delivery system. The aim of the study was to investigate vaporization using the Volcanos device as an alternative means of delivery of inhaled Cannabis sativa. Eighteen healthy inpatient subjects enrolled to compare the delivery of cannabinoids by vaporization to marijuana smoked in a standard cigarette. One strength (1.7, 3.4, or 6.8% tetrahydrocannabinol (THC)) and delivery system was randomly assigned for each of the 6 study days. Plasma concentrations of D-9-THC, expired carbon monoxide (CO), physiologic and neuropsychologic effects were the main outcome measures. Peak plasma concentrations and 6-h area under the plasma concentration–time curve of THC were similar. CO levels were reduced with vaporization. No adverse events occurred. Vaporization of cannabis is a safe and effective mode of delivery of THC. Further trials of clinical effectiveness of cannabis could utilize vaporization as a smokeless delivery system.

The Institute of Medicine (10 m) report on Marijuana as Medicine published in 1999 concluded that ‘‘scientiﬁc data indicate the potential therapeutic value of cannabinoid drugs, primarily THC, for pain relief, control of nausea and vomiting, appetite stimulation; smoked marijuana, however is a crude THC delivery system that also delivers harmful substances’’.1 The report recommended that clinical trials of cannabinoid drugs for symptom management should be conducted with the goal of developing rapid onset, reliable, and safe delivery systems. While acknowledging therapeutic potential, the IOM report stressed that cannabis is not a completely benign substance, but a powerful drug with a variety of effects, but ‘‘except for the harms associated with smoking, the adverse effects are within the range of those tolerated for other medications.’’ The report comments that ‘‘because of the health risks associated with smoking, smoked cannabis should generally not be recommended for long-term medical use. Nonetheless, for certain patients, such as the terminally ill or those with debilitating symptoms, the long-term risks are not of great concern.’’ The Institute of Medicine sends a clear message suggesting that smoking is not a desirable delivery system for the potential therapeutic effects of cannabis.

Cannabis vaporization is a technology for delivering inhaled tetrahydrocannabinol (THC) and other cannabinoids while reducing toxic byproducts of smoked cannabis primarily caused by combustion.2,3 By heating cannabis to a tempera­ture between 180 and 2001C, it is possible to vaporize the cannabinoids that reside on the trichomes on the surface of cannabis ﬂowers and leaves, while avoiding combustion (which occurs at 2301C and above) and attendant smoke toxins. Vaporization is a relatively new technology. Various vaporizer designs are currently under development. The feasibility of vaporization of THC has been demonstrated in a series of laboratory studies involving different vaporizer designs.2 An electric vaporizer was shown to release substantial amounts of the THC while producing no measurable amounts of the benzene, toluene, and naphthalene, which are generated when marijuana is smoked. Reductions in carbon monoxide (CO) and tar generation were also observed under vaporiza­tion compared to smoking. Although no measurements were made of other smoke toxins, it is quite possible that the vaporizer eliminated or substantially reduced the polycyclic aromatic hydrocarbons and other combustion-generated toxins commonly found in cannabis smoke, as they form at the higher temperatures of pyrolysis.

A recent evaluation of the Volcanos vaporizer device used herbal cannabis or pure cannabinoid ethanolic solution preparations to test the efﬁcacy and reproducibility of THC delivery into the balloon receptacle.4 Cannabinoids were measured in the THC-containing materials before and after vaporization, and in the vapor that was generated by the device and collected within the balloon. The results validated the Volcanos vaporizer as an efﬁcient and reproducible mode of delivery of D-9-THC. On average, 54% of the applied dose of THC was recovered in the balloon receptacle.

This study investigated vaporization using the Volcanos device compared to smoked cannabis. This is the ﬁrst pharmacokinetic and pharmacodynamic evaluation conducted in humans to determine whether the Volcanos may be an appropriate system for use in clinical effectiveness studies.

Participants were predominately men (83%), Caucasian (72%), with some college education (94%). All of the partici­pants were active marijuana users (median 5–6, range 3–10 marijuana cigarettes in the past 30 days). None had used the Volcanos device, although one participant had previously experienced vaporized marijuana using a similar device.

There was evidence of decreasing bioavailability and/or titration of THC intake with increasing strength of THC. The plasma THC AUC derived from the vaporizer normalized for the THC strength was highest at 1.7% THC (27.1 ng h/ml/%) and was progressively lower at higher THC strengths (3.4% THC: 20.5 ng h/ml/% and 6.8% THC: 14.3 ng h/ml/%; Table 1), suggesting higher bioavailability and/or more intensive pufﬁng at lower THC potency. This decline was statistically signiﬁcant (ratio: 0.87; 95% CI: 0.84, 0.90; Po0.001 per 1% increase in THC strength) and did not appear to differ between vaporization and smoking (ratio for interaction: 0.92; 95% CI: 0.79, 1.05; P ¼ 0.25) in a mixed model which included ﬁxed effects for randomization, a linear term for THC strength, and a term for the interaction between these effects. 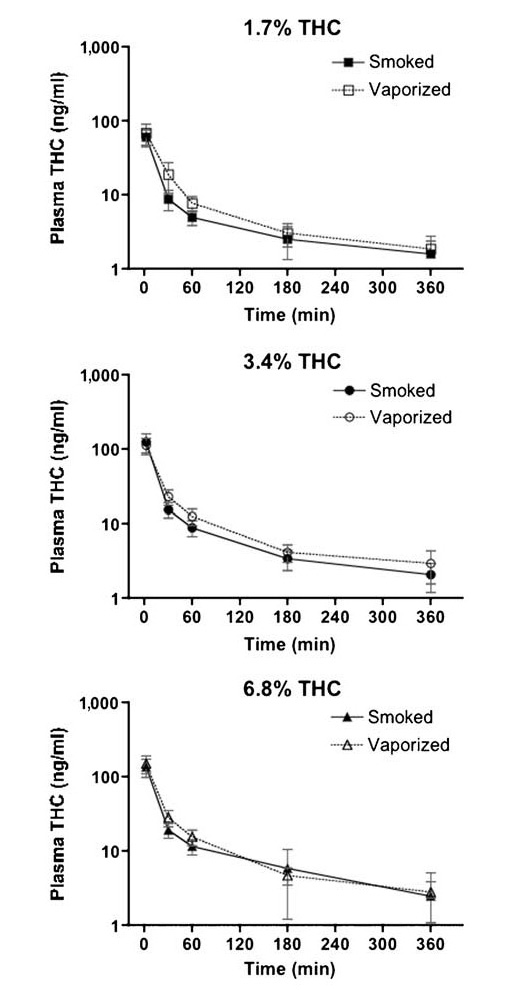 Figure 2 Expired CO at each time point for each mode of administration and THC strength (mean and 95% CI). 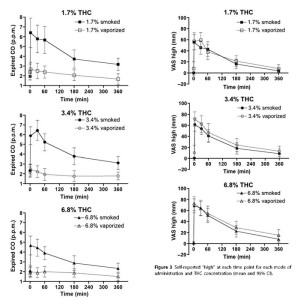 Figure 3 Self-reported ‘‘high’’ at each time point for each mode of administration and THC concentration (mean and 95% CI).

compared to smoking marijuana cigarettes. We found that THC levels were generally similar over 6 h for the two types of delivery. The vaporizer was associated with higher plasma THC concentrations at 30 min and 1 h compared to smoking at each THC strength, suggesting that absorption was faster with the vaporizer.

Bioequivalence criteria developed for drugs require that the CIs for the ratios of AUC for the test and reference products be between 80 and 125% to be judged bioequiva­lent.5 Using these criteria, we were not able to establish the bioequivalence of vaporization and smoking of marijuana. A much larger study would be needed to establish bioequiva­lence in this setting.

for vaporized and smoked cannabis. This observation suggests either dose-dependant bioavailability or self-titra­tion of THC intake. Self-titration of drug intake means that smokers adapt their smoking behavior to obtain desired levels of THC from the particular delivery system, taking more puffs and/or inhaling more efﬁciently at lower compared to higher THC strengths. Supporting the idea of titration was the trend to take more puffs at lower THC concentrations of vaporized marijuana and the higher CO per puff at lower THC concentrations of smoked marijuana. The phenomenon of self-titration of psychoactive drug intake from an inhaled delivery system is well documented for nicotine from cigarette smoking,6 but to our knowledge has not been previously reported for marijuana.

Whereas smoking marijuana increased CO levels as expected for inhalation of a combustion product, there was little if any increase in CO after inhalation of THC from the vaporizer. This indicates little or no exposure to gaseous combustion toxins. Combustion products are harmful to health and reﬂect a major concern about the use of marijuana cigarettes for medical therapy as expressed by the Institute of Medicine. Although we did not measure other combustion products such as polycyclic aromatic hydrocarbons and oxidant gases, the observation of little or no CO exposure suggests little or no exposure to these other compounds. The vaporizer was well tolerated, with no reported adverse effects. Most subjects preferred the vaporizer compared to marijuana smoking, supporting its potential for medical therapy. Thus, the Volcanos is an acceptable system and may provide a safer way to deliver THC than smoking marijuana cigarettes.

METHODS Study patients. Participants were healthy adults between the ages of 21 and 45 years who were current cannabis users and had smoked cannabis within the past 30 days but in an amount totaling less than 10 cannabis cigarettes or the equivalent. Subjects with active substance abuse (e.g., recurrent or continuous drug and/or alcohol use) or diagnosed with marijuana dependence as deﬁned in DSM-IV code no.

304.30. were excluded. Subjects were required to abstain from smoking cannabis for 48 h before their admission into the GCRC at San Francisco General Hospital (SFGH). The study was approved by the Institutional Review Board at the University of California San Francisco, the Research Advisory Panel of California, the Drug Enforcement Administration, the Food and Drug Administration, and the National Institute on Drug Abuse. Written informed consent was obtained from all patients. The trial was monitored by an independent Data Safety Monitoring Board (DSMB) established by the University of California Center for Medicinal Cannabis Research.

Study medication. The National Institute on Drug Abuse provided pre-rolled cannabis cigarettes, weighing on average 0.9 g and containing 1.7, 3.4, and 6.8% D-9-THC, respectively. The cigarettes were kept in a locked and alarmed freezer until they were dispensed to a locked freezer in the San Francisco General Hospital General Clinical Research Center where the in-patient study was conducted. The cigarettes were bisected; one half to be smoked and the contents of the other half to be vaporized. The half cigarettes were rehydrated in a humidiﬁer overnight before their use. Patients were housed in a room with a fan ventilating to the outside. Research staff monitored patients during smoking sessions, weighed the cannabis cigarettes immediately before and after they were administered to patients, and returned all leftover material to the pharmacy. To maximize standardization of inhaled doses, patients followed the Foltin uniform puff procedure where inhalation for 5 s is followed by a 10 s breath hold, then exhalation; the entire process is repeated after 45 s.7 Study participants smoked or vaporized cannabis once a day. Subjects were instructed to continue pufﬁng until they exhausted smoke or vapor from the delivery device or until they had inhaled as much as they could tolerate. 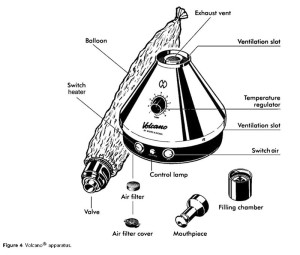 The vaporizer device. The Volcanos vaporizer was obtained from Storz & Bickel GmbH & Company (Tuttlingen, Germany) and was employed according to the manual provided. The device works as a vaporizer that evaporates the active substances or aromas from plant material by using a hot airﬂow (Figure 4). Cannabis placed in the ﬁlling chamber is heated by the device to 1901C. The vaporized compounds are collected in the inﬂatable, detachable bag ﬁtted with a mouthpiece and a one-way valve that allows the vapor to remain in the balloon until inhalation. It required two to three balloon inﬂations to vaporize each half cigarette. Subjects also followed the Foltin puff procedure when inhaling the vaporization product.

Study design and procedures. The study was a 6-day ‘‘proof of concept’’ pilot study to investigate the delivery of cannabinoids by way of vaporization of cannabis compared to cannabis smoked in a standard cigarette. The in-patient setting permitted us to measure plasma THC concentration over time and to rigorously assess the primary and secondary outcome variables in a controlled clinical environment.

Screening visit. Once a subject for the protocol had been identiﬁed, details of the study were carefully discussed and the subject was asked to read and sign a consent form. Subjects were asked questions about their medical history including psychiatric illness and substance abuse. Subjects were asked to abstain from smoking or ingesting cannabis 48 h before their hospitalization based on our prior studies which indicated that after 24 h of abstinence, plasma THC concentrations are sufﬁciently low so that the concentration-time curve could be determined after the experimental exposure.8

GCRC in-patient hospitalization (days 1–6). Subjects inhaled three strengths of cannabis (1.7, 3.4, and 6.8% THC) as smoked cigarettes and three as vaporized cannabis using the Volcanos device. Half of one cigarette was inhaled via one of the two delivery systems on each of the 6 in-patient GCRC days. The uniform puff procedure described above was utilized to attempt to standardize inhalation. Blood was drawn at 2, 30, 60, 180, and 360 min after smoking on each of the 6 inhalation days to measure the concentrations of THC. Expired CO was measured using the Ecolyzers before inhalation, and 2, 30, 60, 180, and 360 min after inhalation.